IN MEMORY OF BETTY WOODS AND WILLIE MAY WILLIAMS

WE MOURN THE LOSS OF TWO FROM OUR COMMUNITY 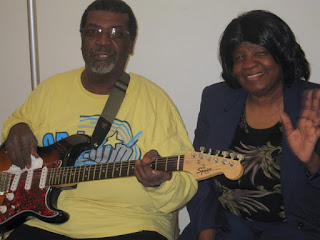 Betty Woods with Wilbert form a singing duo
Newspaper articles from 1999 include photos and quotes from Willy May speaking out about the community’s concerns for their health after the unprecedented bird mortality raised the issue of pesticide contamination of wildlife and the environment.  Betty Woods has spoken to student groups about her experiences as a farmworker, and has been quoted explaining how much she enjoyed working on the farms, being outside and harvesting the crops that fed America.

At the opening reception of the After the Last Harvest exhibit at the African American Museum of Art in Deland, FL on May 11th, we dedicated the exhibit opening to the memory of Willie May Williams.  The loss of these two former farmworkers only emphasizes the importance of, significance of, and relevance of the Lake Apopka Farmworker Memorial Quilt Project to keep the lives, the histories, and the struggles of this community alive.

Today, we dedicate this blog to the memory of these two women whose lives we honor and remember with love, appreciation and respect.  We will miss you, Betty and Willy May!  And, we will always remember you!
Posted by FWAF at 8:53 AM