Yesterday, I began my 11-month service term with the Farmworker Association of Florida as a Notre Dame AmeriCorps member.

Despite growing up a mere 20 minutes away in Orlando, I was unfamiliar with the organization, and I still have a lot to learn about the Apopka community and history. However, my first day presented the perfect opportunity to learn about the stories behind the Lake Apopka Farmworker Memorial Quilt project, giving insight into the culture and history of Lake Apopka farmworkers. 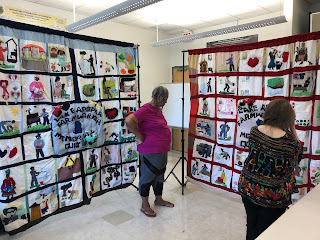 Linda Lee, one of the main artists for the Lake Apopka Farmworker Memorial Quilts, was at the Farmworker Association to display her work from nearly ten years ago. Linda's reason for placing her quilts on display was for visiting author Nano Riley. Nearly 20 years ago, Nano wrote her book, Florida's Farmworkers in the Twenty-first Century, and in the process she interviewed several people from the Apopka community.

Linda knew multiple community members presented throughout Nano's book, and even had family members featured as well. Nano is now back to write an article about the Lake Apopka Farmworker Memorial Quilts, and Linda was happy to display the quilts as well as her other projects. 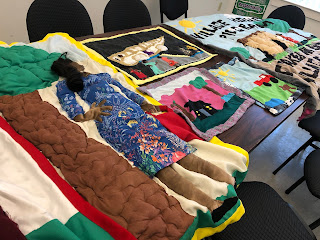 I was able to ask Linda about specific patterns and the stories and inspiration behind them. The pattern below is referred to by Linda as, "The Forgotten Women". She said she made this quilt to commemorate the women who worked in the muck for years, but were never remembered or thanked. 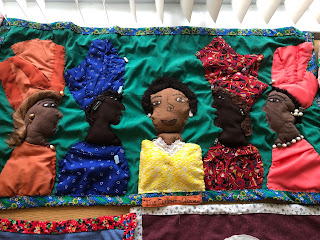 The pattern below was inspired by her memories of her father, who was a farmworker in the orange groves that employ so many Florida farmworkers. Linda said this is an image of her father climbing up a ladder to harvest oranges from the trees, with the truck that was always taken out into the groves with him. 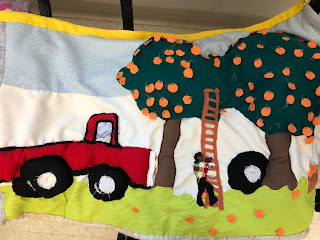 The image below shows two patterns, one featuring a boy holding a basketball, and the other shows a woman with her purse. Linda often uses human hair in her creations, saying she was inspired by her granddaughter, who was a hairstylist, and occasionally sewed hair for her clients. She brushes and rolls the hair on the quilts to keep it looking nice. When referring to the quilt of the woman below, Linda said she calls her the, "Sassy Lady", claiming, "she's just what they call a baller." 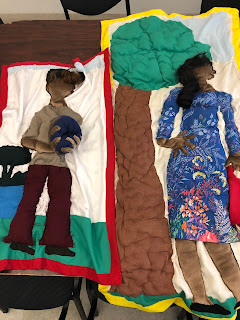 While Linda was given the opportunity to display her quilts for Nano, we also made a visit to the home of Mary Ann Robinson, another quilt maker and former farmworker from Apopka.

Nano interviewed Mary Ann for her article, asking about the life of both her and her mother as farmworkers in the muck. Mary Ann's description of the muck work was eye-opening. She described how the crop dusters would make daily pesticide drops over the farmworkers, and how the grueling work was something she stopped as soon as she could. While Mary Ann spent about six of her teenage years working in the muck, her mother was there for almost 20 years. The lack of research behind the Lake Apopka farmworkers' health conditions means it could never be proven, but Mary Ann believes that her mother's early-onset Alzheimer's was caused by the repeated exposure to pesticides. 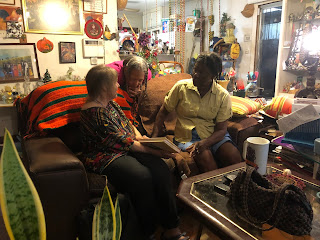 Mary Ann has a quilt displayed in her home as well, specifically dedicated to the memory of her family, the majority of whom were farmworkers as well. Several of the squares feature pictures of her different family members. 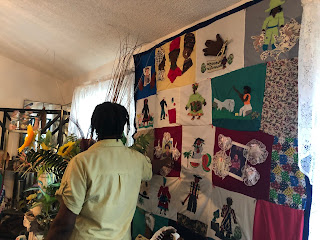 I was very lucky to have the opportunity to speak with Linda and Mary Ann yesterday. Their involvement with the Lake Apopka Farmworker Memorial Quilt project and their first-hand experience as farmworkers allowed me to gain so much insight into the history of Apopka and the Farmworker Association. Although I still have 11-months left in my term, so I'm sure I will have the opportunity to learn even more.
Posted by FWAF at 10:15 AM