On September 25th and 26th, the Farmworker Association of Florida was given an opportunity to spread the stories of the Lake Apopka Farmworkers to several classes of college students.

For several years now, Dale Slongwhite, the author of Fed Up: The High Cost of Cheap Food, and Linda Lee, the lead artist behind the Lake Apopka Farmworker Memorial quilts, have gone to Seminole State College to teach students about the history of the Lake Apopka farmworkers. This is done through the courses of professor Anne Riecken, who invites Dale and Linda to speak so that her students can gain insight into this example of environmental injustice. 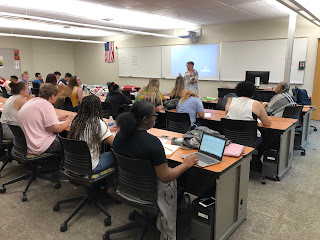 Dale began the class by introducing herself and how she was inspired to write her book, which features interviews with multiple Lake Apopka farmworkers. She said that while attending a conference on environmental justice, she heard Linda speak about her past as a farmworker. Linda's story was so unique and shocking that Dale wanted to do more to investigate and spread the story of those who worked on the Lake Apopka farms. After nearly five years of work, Dale published her book in 2014. 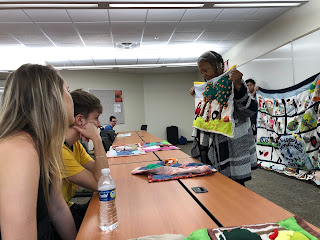 After Dale's introduction, a short film was shown to the students. The film, Pesticide Lake, explores the long term effects of pesticides on the Lake Apopka ecosystem and the former farmworkers. Linda reflected sadly afterwards, stating that all the other Lake Apopka farmworkers featured in the video have passed away. The video is only four years-old.


Linda's time to speak came after the film, and she stated, "Muck life is a hard life."

Over the course of three different classes, she covered a variety of topics that explored her and her family's lives as farmworkers. The common themes of Linda's discussions were the unfair treatment of farmworkers and the health issues that arose from working with constant pesticide exposure. 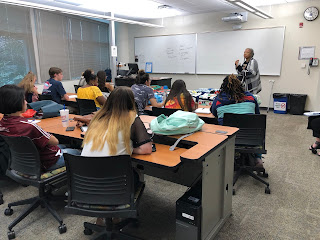 Constantly, the farmworkers on Lake Apopka had their wages stolen by crew leaders and growers who exploited their work. Linda recalled a time when she and several other farmworkers stayed after work until 11 o'clock at night to move cabbages because they were promised compensation for their work. She said they never saw a dime from that evening. If a farmworker complained to a crew leader about their stolen wages then they were fired, or even run out of town by the farms that employed them. The options were either allow your wages to be stolen, or face unemployment and homelessness. 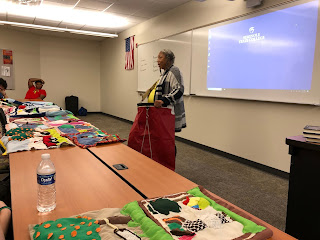 Additionally, farmworkers were at a constant threat of being sent to labor camps. Often when farmworkers were walking somewhere there would be cars that came along and offered them a free ride to their destination. Once they got in, they were taken to camps where they were given food, alcohol, cigarettes, and other items. When they would try to leave, the camps told the farmworkers that they owed them money for the food and alcohol that was given to them, and they would have to work it off if they wanted to leave. However, it was nearly impossible to work off their debts to the camps, since the camps would charge the farmworkers to eat and live on their property. Escape was usually the only option out. 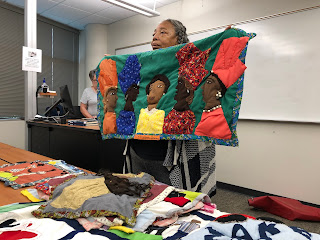 While the treatment of farmworkers by the farms they worked on was difficult enough, Linda said the health consequences have been seen at a massive level. Former farmworkers went on to develop different diseases caused by the constant pesticide exposure. Lupus, kidney failure, black lung disease, and different forms of cancer were just a few of the causes of death that Linda named for those facing pesticide exposure over the years. Additionally, many of the diseases caused by pesticide exposure were passed on to following generations, meaning that the farmworkers' children and grandchildren still face problems caused by the pesticide exposure from decades ago. However, because the government refused to spend any money researching the long term effects of the pesticides on farmworkers, the farmworkers have not received any help in paying for or receiving medical treatment. At one point, Linda says she would attend 10-14 funerals a week. "They were human beings," she said, speaking about the farmworkers, "and they were good human beings, too." 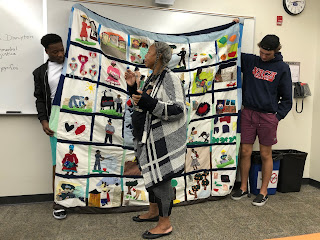 The environmental injustice that farmworkers still face is seen in the placement of toxic facilities right beside the homes. The health effects of living by such toxic locations is still having an impact on families. Linda ends her discussion by encouraging the students to stand up to politicians and advocate for what you believe in.
Posted by FWAF at 11:44 AM