Climate Change and Lake Apopka Farmworkers – what do they have in common?

The beautiful and magnificently, artistically painted bus rolled into our Apopka parking lot on Sunday, August 26th on a sunny Florida summer day.  Inside the bus was a team of experts, advocates and reporters from Climate Nexus, Nexus Media and Think Progress on the Freedom to Breathe Tour to highlight the dangers to and impacts of climate change and rising temperatures on vulnerable populations, including farmworkers, in the South.  And, Sunday was a perfect day for the crew to experience some of that heat first hand. 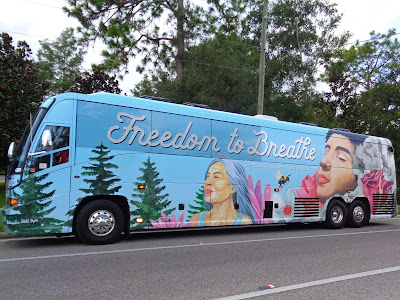 Embarking on a Lake Apopka Toxic Tour that included visiting the former Lake Apopka farm lands; Magnolia Park where you could see the lake itself covered in algae, making the water opaque; and returning to the Farmworker Association office, the team learned of the harsh realities farmworkers face every day – past and present – in order to provide food for the rest of the nation.  In addition to pesticide exposure, farmworkers increasingly today battle high temperatures, increasing annually due to climate change, and humidity that make heat stress and heat stroke a serious health concern related to short and long-term health consequences.

Standing in the blazing sun on the old Duda Farms property, at an entrance to what is now the North Shore Restoration Area hiking trail, each team member felt the intense heat as they learned the history of the Lake Apopka farmworkers and imagined what conditions were like when the farms were in operation.  Unlike the farmworkers, however, everyone was able to then leave the hot environment and re-board the cool, air conditioned, comfortable bus, as they pulled away from the farms to continue the rest of the tour.

The last stop on the tour was the most important. Former Lake Apopka farmworker and community leader, Linda Lee, met the team at her home, where everyone sat outside in the shade to try to stay cool, while Linda recounted her memories of working on the farms and the harsh working conditions she endured.  Speaking from the heart and recounting her stories and her experiences put a face to the facts.  Reading statistics and scientific studies is one thing, hearing the voices of the people – well, that is the true story, and one that everyone needs to hear.  For the crew, it was the most memorable part of their visit to Central Florida’s farmworker community, as they continued their travels around the state, crying the clarion call of climate change, rising temperatures, and the risk to human health of heat exposure.


Nexus Media Video / The invisible Ones.

If you are connected with a community organization or a school group and are interested in doing a toxic tour please contact farmworkerassoc@aol.com