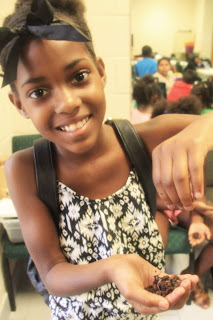 
The history of Freedom School programing dates to the 1960s. The structured Freedom Schools program was developed by the Student Nonviolent Coordinating Committee (SNCC) during the 1964 Freedom Summer in Mississippi. They were intended to counter the "sharecropper education" received by poor Americans.

Focused on providing curriculum that helps to empower, educate and support youth in learning about afrocentric history and about their communities. These kids in South Apopka, aged 5-10 experienced a Wakanda themed two weeks as they learned about the real African Tribes from the Wakanda movie and were led by camp staff volunteers “tribal leaders” who consisted of Americorps volunteers, UCF college Students and local Apopka community members. Along with their Wakanda experience they learned about healthy eating, self love/empowerment, Agroecology, DNA, social activism, African Dance and much more!

As part of their environmental and community lesson, they visited the Farmworker Association to learn about the Lake Apopka Farmworkers. The kids were curious, attentive and very concerned about what happened to the Farmworkers as well as how people in their community are affected by the lake’s contamination today. The group drove past sites such as Duda Farms as they learned about what has happened to the environment around them. One of Linda Lee's grandchildren, participated in the program and was voted as a leader by his own peers!

Freedom School programming will likely continue in South Apopka during school breaks and holidays for community kids to continue learning about these important topics.

For more information about how to get involved or support in any way please contact Lashae Copeland -LCopeland@HCC-0ffm.org or at (407) 880-4673.
Posted by FWAF at 9:38 AM