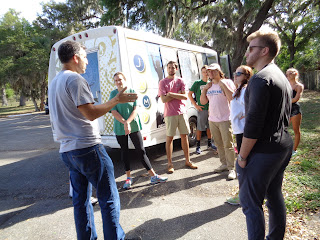 Thursday March 1st Rollins Biology students visited FWAF for a Toxic Tour with their Professor, Dr. H. Bobby Fokidis who teaches in the department of Biology at Rollins college. Professor Fokidis knew and had worked with Dr. Louis Guillette, who conducted the alligator studies on Lake Apopka that ultimately concluded that they're were imbalances of reproductive hormones in the alligator population. The students in this class were made up of students interested in biology relevant to our everyday lives. The tour began around 8am and ended at 10:30am. Thank you to this class of biology students who showed much interest and asked many questions about Lake Apopka and the people who were affected by the contamination of the farm lands.

On Wednesday March 8th, as part of Hope Community Center's service immersion program students from Xavier College and Loyola University were brought together.  On this day, they were visiting FWAF for an hour long presentation to learn about the issue of the Lake Apopka farmworkers and the realities for farmworkers in general.  The students had been working in the nurseries interacting with workers during the week and visited the FWAF Campesino's Community Garden as part of their service learning week but gained a deeper context of the issues during their visit to FWAF. 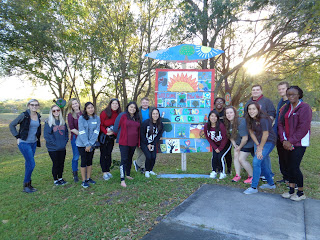 On Friday March 9th Florida State University Law students from Tallahassee came to FWAF Apopka for a service learning weekend. The weekend began with a Lake Apopka Toxic Tour on Friday March 9th. On Saturday the 10th they spent 1/2 day working in a nursery and 1/2 day doing outreach. On Sunday the 11th, they participated in an intensive workshop learning day to learn about the immigration issues impacting farmworkers and health and safety issue as well as the Worker Protection Standard and chlorpyrifos. The workshop on Sunday was facilitated by Dominique Aulisio from YAYA (Youth and Young Network of the National Farmworker Ministry) and Antonio Tovar who is our staff researcher at FWAF.  Monday they spent time learning about human trafficking with the Metropolitan Bureau of Investigation.