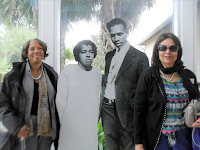 On December 9th 2017, Former Lake Apopka Farmworkers took a trip with  FWAF Apopka staff members and local community member organizers to learn about very important Florida activists Harry & Harriette Moore. The Harry T. & Harriette V. Moore Museum is located in Brevard County, Mims FL. The FWAF staff have been eagerly awaiting this day to be able provide these former Lake Apopka Farmworkers and local Apopka community activists with the opportunity to learn about such influential people who were original civil rights leaders in a fundamental time in history.

Harry T. and his wife Harriette V. were the first true civil rights activists of the modern civil rights era in the State of Florida. Both Harry and Harriette were dedicated to the cause of black liberation during this time. Harry is most well known for heading a black voters registration campaign in 1945 which resulted in the most black voters registered out of all southern states (over 100,000 voters) as well as organizing the first Brevard County branch of the NAACP in 1934.

The influential couple, were murdered in 1951 when a bomb exploded under their humble home on Christmas day. Harry died on the long drive to the closest hospital that would care for black patients, Harriette survived the initial bombing but died 9 days after the night of the bombing incident. They left behind their two daughters as well as a profound legacy of social activism that truly provided a foundation for the recognized time of the civil rights movement.

The FWAF group was extremely grateful to have learned about Harry and Harriette who were so important for civil rights movements all over the country and especially in our own state of Florida. When asked the question "what did you learn today?" 7 year old grandson of former Lake Apopka farmworker Linda Lee said " I know who Harry T. Moore is and I will go to school and tell my teachers all about him"


To learn more about the museum and schedule a tour, please visit their website.