The day began at the Hope CommUnity Center office in Apopka with an introduction on the history and background of farms on Lake Apopka, the people who make up the community of those who lived and worked in and around the farms, and the impacts of the toxic chemicals used on the farm lands for decades. NDA members listened as FWAF staff explained the devastating effects of the pesticides – including persistent organic pollutants, such as DDT -  that were used on the farm lands. 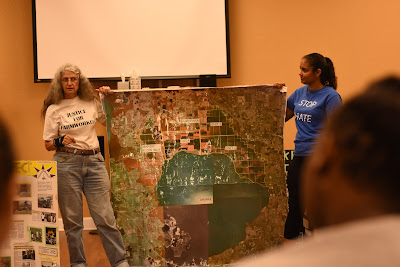 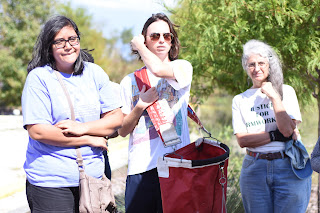 After the introduction, the NDA team traveled in two vans, and stopped at the former Duda Farm entrance that now sports a boat ramp, hiking trail and is an eco-tourism destination, but which previously housed hundreds of farmworkers in trailers next to the fields and where the hiking trail leads out to what once was acres of vegetable cropland for Duda Farms.  Sr. Ann Kendrick, gave a moving personal account of a former Duda camp resident’s experience of returning to the area after having left and moved to the suburbs.  She recounted his sense of loss of community that the workers experienced when they lived there, in spite of the harsh and difficult living and working conditions they endured on the farms.

The group was honored to be accompanied by Farm Worker Association staff member, Mireya Ledesma, who gave insight on what it was like for her as a child having to work in the orange groves after school at 11 years old. She described "We would go work right after school to help my father on the groves, there would be many families picking up their kids after school to head straight to the groves". She is pictured here, wearing a bag used to pack the oranges which can weigh more than 90 lbs when filled.