Learning from Lake Apopka History
The Americorps team based out of Hope CommUnity Center in Apopka, FL is thirty-three members strong this year. Each member is placed at a different site that provides services to the community, such as working in a school or at a local non-profit, like here at  the Farmworker Association, where we have had an AmeriCorps volunteer  every year for the past 7 years. Each individual’s commitment to service is about helping the local community, and  about engaging in the work of social justice. Recently, the members had an opportunity  on December 4th, 2015 to hear from former farmworker and Lake Apopka Farmworker Memorial Quilt Project quilter, Linda Lee. Linda shared her personal story of injustice while working on  the Lake Apopka muck farms. With great strength and passion, she shared the pride her father had in being a farmworker, and her strong belief that farm work is honorable and skilled work. 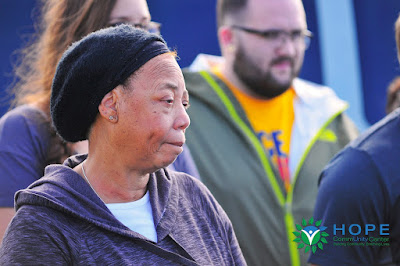 The FWAF Pesticide Health and Safety Coordinator shared her experiences in witnessing the mistreatment of the farmworkers when the farms unceremoniously closed in 1998, costing over 2,000 people their jobs, and in many cases their homes. She also showed the group sites of the former farms and the contaminated lake that spurred the clean-up effort that eventually closed the farms. She explained the historical roots in slavery that allow farmworkers to be abused and excluded from labor laws that protect the rest of the population. Domestic workers, as the other class of workers excluded from U.S. fair labor laws, also are a living legacy of slavery in this country, as they perform the work that was indicative of former slave labor in the United States.  To the shock of many, she shared with the AmeriCorps group how bad the conditions are for farmworkers in our country today. The unbelievably low wages and the general disrespect they suffer was upsetting and disturbing to the listeners, but they recognized it as an important part of history and as a disturbing current reality.
Adding to the poignancy of the Toxic Tour, Sister Ann Kendrick of Hope CommUnity Center  remembered the sorrow and loss felt by the farmworkers as their employers made clear that their workers were expendable and less than fully human to them. Hearing the Linda Lee was a moving experience for the group, and learning the history of Lake Apopka will inform the rest of their year of service to the community. 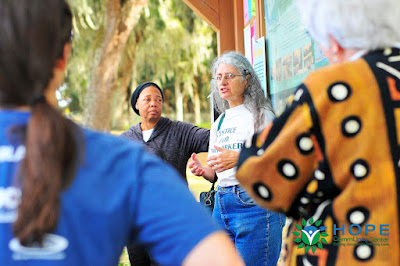