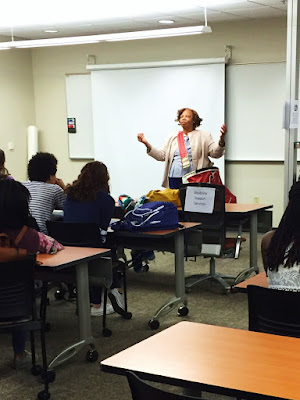 On October first, former farmworker Linda Lee spoke to the students of Seminole State College about Lake Apopka's history. Anne Riecken of SSC’s English department invited several of her classes to attend a presentation on Lake Apopka and Farmworkers. The Farmworker Association's pesticide health and safety project coordinator began by discussing how Lake Apopka went from a world-class bass fishing lake to the most polluted lake in Florida. She also shared how the pesticides affected the birds and alligators of the lake, when one student astutely asked "how long until this starts killing people?" His answer was from Linda Lee, who spoke passionately on how many people all around her have gotten sick and died after decades of long-term chronic exposure to pesticides. 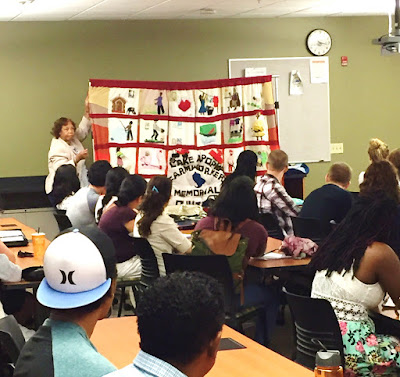 “Any Disease you can think of, you can find it in Apopka” she said. It is no wonder that disease is widespread considering over 90% of the farmworkers who worked on the Lake Apopka Farms were exposed to the same toxic pesticides that killed over a thousand birds in a single season. She also shared the Lake Apopka Farmworker Memorial Quilts, specifically the red quilt, and shared the stories behind some of the squares on the quilt. Farmworkers also worked in other kinds of crops, in addition to the vegetable fields on Lake Apopka.  Students were moved by Linda's words as they watched her lift an orange –picking sack over her shoulders, demonstrating the size of loads – 80-90 pounds per sack - farmworkers must fill and carry many, many times per day to make depressingly low wages even today. Linda commanded respect and students sat rapt listening to her stories and memories as they were moved by her drive for justice for her community. 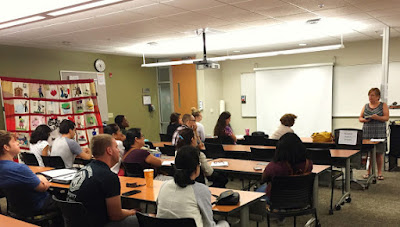 Dale Slongwhite complemented Linda’s stories by reading from her book Fed Up: The High Costs of Cheap Food.  Dale spoke as a writer and encouraged students to seek out stories that are outside their own experience. Writing for discovery as she explained it, brought her into a community she otherwise might not have known. She began with no knowledge of the injustice farmworkers face, with no idea it was happening right here in her own community, close to where she had lived all along. By delving deeper into the history she found Linda’s stories, and many like hers. Dale immersed herself in the community to be able to tell the stories of the Lake Apopka farmworkers. She is an inspiration and students lingered after the presentation to speak with her. Many students hung back perusing brochures and asking questions, eyes opened to a history, an injustice, that now has a powerful human face.
Posted by FWAF at 11:42 AM