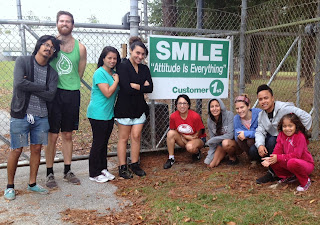 On a gray and windy Sunday afternoon, five members of YAYA-NFWM (Youth and Young Adult Network of the National Farm Worker Ministry) and three students from Rollins College in Winter Park, Florida and the young daughter of one of the students ventured on a Lake Apopka Toxic Tour to learn about the environmental problems on Florida's most contaminated large lake and to learn about the history of farmworkers and agriculture in the area. 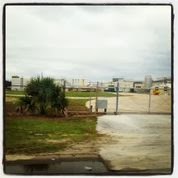 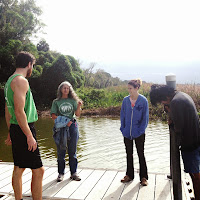 The wild and windy day lent an aura of drama to the Toxic Tour, as the group passed a small farmworker labor camp, a Superfund site with stacks of pesticide barrels, a sewage treatment plant whose smell was overwhelming, rows of blueberry bushes followed by acres and acres of farmland cultivated in cucumbers and other crops that are worked by farmworkers in season.

Everyone was surprised to see Lake Apopka itself and asked questions about why the lake was in such poor condition.  Seeing the lake and the farmlands firsthand was a powerful experience that made real the issues and realities faced by farmworkers in the local community.  At the end of the tour, everyone felt a renewed and even stronger commitment to work for social justice for farmworkers. 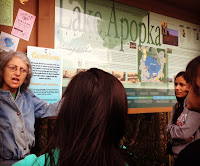 Much thanks to Nico Gumbs of National Farm Worker Ministry & organizer for YAYA, Youth and Young activists, for the excellent photos!

And thanks to the Hope CommUnity Center for the use of their 15-passenger van to accommodate the tour.