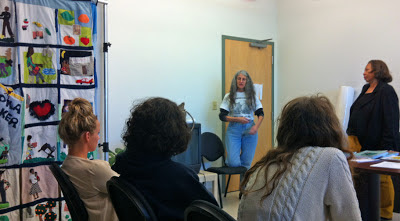 As reported by Dr. Olmstead of Apopka to CNN

Late one winter morning, I tripped upon the beginning of a “Toxic Tour” at The Farmworker Association of Florida in Apopka (FWAF). Jeannie Economos, in a Farmworker tee shirt and her free-flowing hair, led a discussion session along with a former farmworker. Margaret McLaren, PhD, Rollins College, and a class of her philosophy students listened intently in total silence as the two social activists spoke.

The farmworker explained the life of the farmworkers who worked the croplands of Lake Apopka’s muck shores over a fifty-year period. Human mismanagement of the fragile ecosystem led to the decline of (early eutrophication) the lake, death of valuable wildlife, and the accidental poisoning of the humans working the land.

The Quilt Project is an artistic memorial of people who have suffered and died farmworking. The Blue Quilt Project is in the photos. A red quilt was also made. The FWAF’s website declares that one farmworker dies each day in the United State of America while harvesting fruit and vegetables. Each square of the quilt shows how people enjoyed their lives while farming.

The students participated in a tour and discussion of the federal Superfund Sites on Lake Apopka and drove along the sites of several former muck farms bordering the Jones Road, Zellwood area. Though avian life has made a major comeback, tree farms, recreational trails, and empty lands are almost entirely replacing the crop farms. Some of the shores have been filled with high-end housing instead of the decrepit hired hand houses and trailers.

The Rollins’ students hung on every word of Jeannie’s local history lesson and engaged in interesting and deep discussions on environmental, economic, gender, and social justice. Environmental justice is defined by the federal government at http://www.epa.gov/region4/ej/.

The tour stopped on the east shore of the lake at Magnolia Park in Orange County and then traveled past the nurseries and landfill ‘mountains’ along and a biological incinerator site on Keene Road.
Background and history links about Lake Apopka can be found on a Rollins College website is at http://myweb.rollins.edu/jsiry/Lake_Apopka_as_political.htm.

After the tour, I discovered some background material on The Farmworker Association of Florida’s website. http://floridafarmworkers.org/index.php/2011-08-08-16-02-46/lake-apopka-project.

Educating people on hard-learned lessons of our past to remind others not to allow the repetition of these errors is an important cause for this educator. With four degrees in education, I know teaching does not stop at the schoolhouse door.
Posted by FWAF at 11:14 AM