Is this sunny Florida? Students from as far away as New York, Illinois, and California, and some from Florida, swooped into Apopka on a dreary, drizzly and wet Florida winter day on Saturday, December 18th.
Part of a week-long service learning activity coordinated with the Society of St. Andrew and their gleaning projects, the students came from a variety of universities, among them Cornell and the University of Florida. What they have in common is their membership in an honors agricultural fraternity and their interests in agricultural related studies, ranging from horticulture to plant biology and everything in between. Their beautiful energy, enthusiasm and excitement brought a ray of sunshine into the gray day, as they met at the Apopka office of the Farmworker Association, meeting and greeting each other, some for the first time! 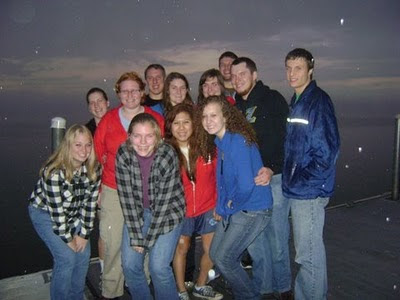 Their first encounter with Apopka was to learn about the lives and working conditions of farmworkers and the environmental issues around Lake Apopka. Watching the video “Out of the Muck,” they heard the voices of community members who have been impacted by chronic exposure to persistent organic pesticides. After a discussion of the alligator studies, the bird deaths, and the struggle of the former farmworkers, they learned a little bit about the other sources of contamination in this low-income, minority community.
But, it was not all talk. After warming up and staying dry in the offices, all twenty-three students then piled into three vehicles to go see the area for themselves. Thus, they embarked on the Lake Apopka Toxic Tour, traveling to the former farmlands, en route passing a small labor camp, the Drum Chemical Company Superfund site, the cabbage fields of Long and Scott Farms, and the St. Johns River Water Management District Field Station. The rain stopped long enough for everyone to take a short walk on the former Duda Farms property, that now sports hiking trails and where they read a sign warning of DDT and pesticide contamination on the former farmlands. Of course, the trip would not be complete without a look at the lake itself.
Pulling into the parking lot at Magnolia Park, the windshield wipers tapping out a beat, the group shrugged off the rain to disembark and get a first-hand look at Lake Apopka. (See photo.) Through the fog and drizzles, and laughter and talk, everyone walked out onto the dock overlooking the lake they had just learned so much about. More questions and answers, and with spirits undampened, the group posed for photos before boarding their van and cars again to complete the trip.
The tour concluded with a drive past the county landfill and the medical waste incinerator, but by this time, the waning light and misty atmosphere revealed no more than outlines. Nonetheless, the trip had left an impression on all, and, in spite of the weather’s efforts to quell it, an energy and mutual appreciation was shared among all. We wish the students a great week as they engage in other projects during this magical week before Christmas.
Posted by farmworker at 8:43 AM